Methi Chaman is traditionally a delectable Kashmiri dish, from the kitchens of Kashmiri Pandits.

Kashmiri cuisine was influenced by the culture which arrived with the invasion of Kashmir by Timur from the region of modern Uzbekistan. Subsequently, Kashmir and its food have been strongly influenced by the cuisines of Central Asia, Persia, Middle East and Afghanistan. This ancient cuisine is a blend of many cultures but with a compelling identity of its own. It is refined, beautiful and full of rituals. The two predominant cooking styles of the Muslim community and that of Kashmiri Pandits have developed through ages of culinary craftsmanship.

Kashmiri Pandits are one of the few Brahmin communities in India who are non-vegetarians, besides Bengali, Odia and Goan Brahmins. Kashmiri Pandits are the oldest inhabitants of the state of Jammu and Kashmir. They have their own distinctive ethnic culture. This defines their lifestyle and cuisine.

In a Kashmiri Pandit kitchen mutton and fish traditionally takes the lead on the table and it appears in some form at every meal. Over time use of chicken has also become popular. Their meat and fish preparations are quite similar to Wazwan (the multi course meal) dishes of the Kashmiri Muslim community but tastes and textures vary.

Methi Chaman or fenugreek flavoured Indian cottage cheese is a highly fragrant and flavourful dish from the kitchens of Kashmiri Pandits.  In Kashmir, it is usually pronounced as “Tsaman” (cottage cheese in Kashmiri) which eventually has become “Chaman” for the rest of India.

This traditional dish is made by using fresh methi (fenugreek) leaves and palak (spinach) leaves and this combination of methi, palak and paneer (cottage cheese) is a killer. With two types of healthy leaves and topped with the goodness of paneer, Kashmiri Methi Chaman is a nutrient package as well.

Some prepare Methi Chaman with paneer cubes and others add grated paneer to the gravy. I like combining both as it adds a bite to the silky-smooth gravy. Kashmiri Pandit recipes are normally prepared without onion and garlic and asafoetida (Hing) is added as flavour enhancer. I have taken the liberty to make few changes and prepare this dish with onion and garlic, which you can omit.

Palak (spinach) and methi (fenugreek) leaves. Proportion 3:1. Wash well and drain. Blanch the leaves together until soft. Drain and keep aside.

Take a large piece of paneer (cottage cheese). Make small cubes of half of the paneer piece. Leave aside rest for later. Shallow fry the paneer cubes in little oil until the exterior becomes golden and crisp.

Tip: Soaking paneer bought from market in hot water for 10 to 15 minutes makes it soft and it does not crumble while slicing or while being cooked in the gravy.

Blanch whole tomatoes for two minute, peel the skin and purée using a blender. Make a purée of the blanched leaves you had kept aside. 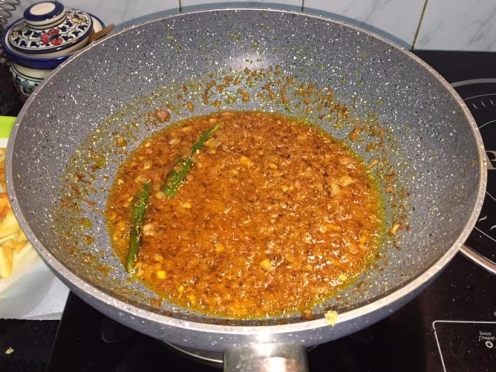 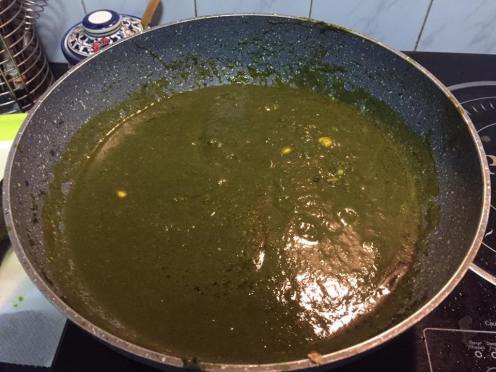 Grate half of the remaining piece of paneer into the gravy. Cook for 2 minutes and switch off the flame. Once the boiling stops add few spoons of light cream and mix well.

Serve in a dish, garnish with coriander leaves, grated paneer and cream. Enjoy your Methi Chaman with hot roti, paratha or naan.