Nothing is more quintessentially Punjab than Sarson ka Saag and Makki ki Roti, it’s an earthy hearty food abundant in flavour, nutrients and colour; much like the land and the people it belongs to.

The local cuisine of Punjab is heavily influenced by the agriculture and farming lifestyle prevalent from the times of the ancient Harappan civilisation. Locally grown staple foods form the major part of the cuisine. Punjabi cooking and eating is just like the Punjabis themselves; simple and forthright.

The earliest references to region’s food are found in the Vedas, which document the lives of the Aryans in the land of five rivers – Punjab. Amazingly, the elements mentioned over 6,000 years ago are still extant in this cuisine. This includes dairy-dughd (milk), ghrit (ghee) and dadhi (curd), shak (leafy green vegetables) and a variety of grain. Even today, the staple in the Punjab is grains and vegetables in their basic form.

Undivided Punjab was situated at the crossroads of the Silk Route. This allowed the Punjabis to imbibe diverse culinary influences. The proximity with Persia, Afghanistan and Central Asia gave them a taste for fresh and dried fruits and exotic nuts. Punjabi cuisine was also strongly influenced by Mughal invaders who brought with them the tradition of the great Tandoor and now Punjabi tandoori cooking is celebrated as one of the most popular cuisine throughout the world.

Mustard greens originated in the Himalayan region of India and have been grown and consumed for more than 5,000 years. Indian mustard greens have stems with tough skins, which, along with the leaves, must be chopped very fine, and steamed till tender.

Sarson ka Saag is a vegetarian delight made from the leaves of the mustard plant, the same plant that gives us the delicious condiment mustard. Traditionally, Sarson ka Saag was the rural people’s food in Punjab and the robust homemade butter-topped saag fits the hardworking lifestyle of the people laboriously working the agricultural lands of the fertile province. Just like Kashmiris refer to one specific kind of green when they say haak, in Punjab, saag too refers to sarson or mustard greens, unless specified otherwise – Palak ka Saag (spinach greens), Bathuey ka Saag, so on and so forth.

Milder tasting spinach is added to the mustard greens to reduce bitterness. Usually in winter months, Sarson ka Saag is the most beloved dish in rural Punjab. Sometimes, even radish greens, bits of radish and turnips are added to the dish to mellow the pungency of mustard. Traditionally, Sarson ka Saag is cooked without using any masala (spice), just a dash of salt and ginger/garlic, mixed in with the greens; mustard greens, green chilli, spinach, bathua and methi (pigweed and fenugreek leaves). It is slow-cooked on wood fire from a clay hearth and hand stirred in its own water until it reaches the desired edible creaminess of freshly churned butter, and then laden with fried onions and topped with farm fresh butter and devoured for simple goodness.

‘Sarson Ka Saag  and Makki Ki Roti’ is globally feted as Punjab’s signature combo meal but it is equally famous in the rural belts of Himachal Pradesh and Haryana too. People hailing from Uttar Pradesh shallow fry sarson leaves and top it with tomatoes and yogurt to overwhelm its strong peppery and bitter taste, an entirely different style of cooking.

For anyone who loves Punjabi cuisine, nothing would depict the arrival of winter better than the sight of Sarson ka Saag; green, glorious and gratifying. There’s nothing quite like a mouthful of saag, soothing not just your taste buds but satiating your soul.

This is a celebration of green leaves or saag. You need two bunches of sarson (mustard), one bunch each of palak (spinach), bathua (pigweed), methi (fenugreek) and a half a bunch of dhania (coriander) leaves. Please chose bunches of fresh and tender leaves.

Green leaves carry a lot of dust and soil. Make sure you wash the leave three to four times to remove all dirt.

All leaves need to be sliced fine as shown in the picture above.

Other ingredients needed at this stage are: about 10 garlic and 4 green chillies diced fine and 2 tablespoonful mustard oil. 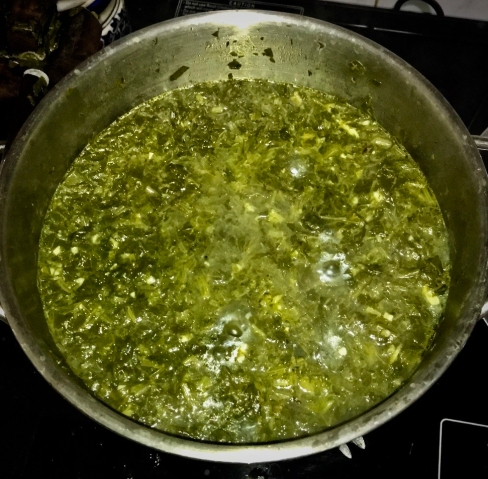 Bring half a litre of water to boil and add all the above ingredients.

Boil on slow flame for about 30 minutes.

Traditionally, Sarson ka Saag is slow boiled and mashed with help of a traditional wooden hand churner. After boiling the leaves for 30 mins (previous step) start the churning and mashing. Its a laborious process; churning and mashing the slow-boiling leaves continuously until the leaves are almost mashed and reach a silky, buttery consistency. It will take about one and half hour to reach the consistency shown in the picture above.

If you do not want to go through this long and test of “strength in your arms”, boil the leaves in a pressure cooker and pulverise using a blender to a slightly rough texture. The slow cooking brings in the trademark flavour to this dish, which pressure cooking and pulverising can’t guarantee.

Lets now thicken the saag and prepare the tadka/chhonk (tempering). You will need a cup of makki ka atta (corn meal), two to three (depending on size) onions and tomatoes diced finely. Do not confuse makki ka atta with cornflour. Makki ka atta is the flour milled from maize or corn . It is coarse in texture and the colour may vary from light yellow to dark yellow. Cornflour or cornstarch is milled to a finer texture and white in colour. 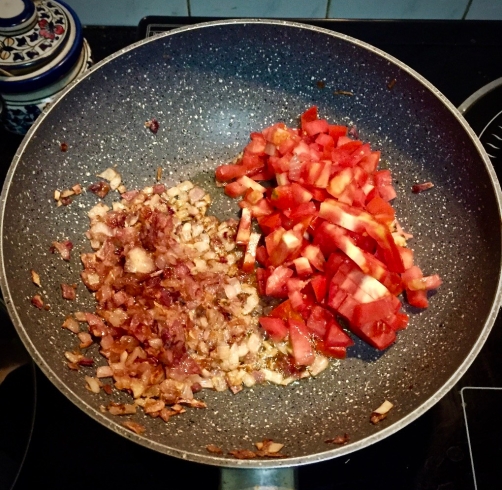 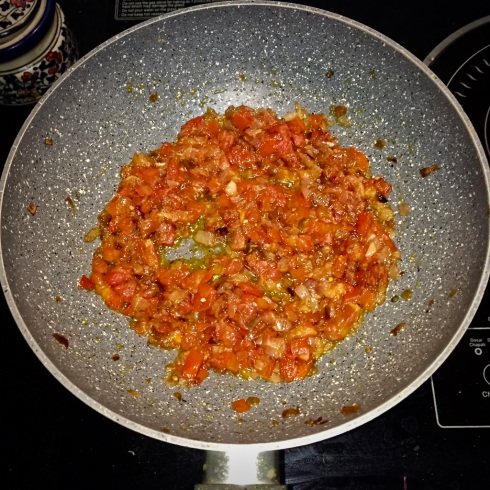 Heat a pan and add three tablespoon ghee (clarified butter). Traditionally, most of the dishes in Punjab are prepared with ghee for its earthy aroma. You may chose to use any oil of your choice instead of ghee. Add the onions and fry until the onions turn golden brown. Add tomatoes and cook till they become soft and mushy.

Pour the saag into the pan and mix well. Cook for another 10 minutes, so that the tempering mixes well with the saag. Switch off the flame. Your Sarson ka Saag is ready. 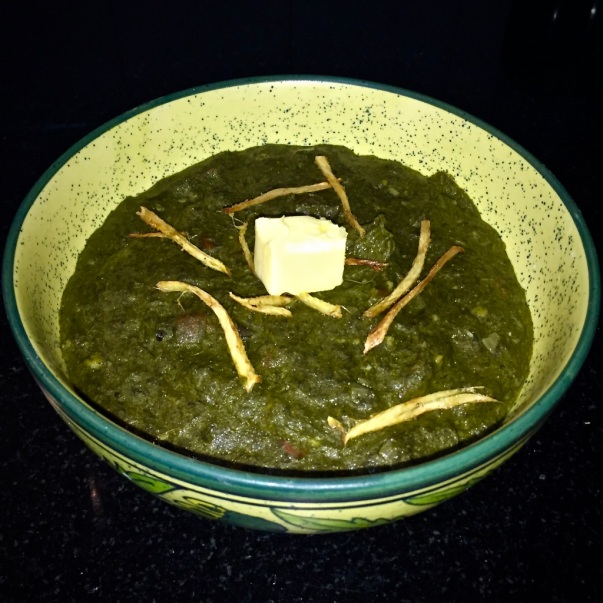 Remove the saag in a bowl. Garnish with ginger julienne fried lightly in ghee and blob of unsalted butter.