There are days when you are a bit under the weather; the palate detesting tel-masala (oil and spices). You crave for something simple and easy on stomach and you thank Almighty for bestowing mankind with the “KHICHDI“.

This ancient, humble staple is popular around the subcontinent, where everyone seemingly has their own recipe for it, and has been enjoyed by peasants and emperors alike for thousands of years. Its name has its origins in the Sanskrit word Khiccā, which translates to ‘a dish made with rice and pulses’. The gastronomic literature of ancient India also has many mentions of the Krusaranna, an early relative of Khichdi that had ingredients such as curd and sesame seeds.

In 290BC, Greek historian and diplomat Megasthenes observed that a combination of rice and pulses was a common dish across India. Ibn Batuta, the famous Moroccan traveller, who visited India in the 14th century, also noted the popularity of the dish.  “Munj is boiled with rice, then buttered and eaten This is what they call Kishri, and on this, they breakfast every day,” Batuta wrote.

The mighty Mughals too fell in love with this rice-dal staple and gave it an important place in the imperial menus of medieval India. There are several historical references to Akbar’s penchant for Khichdi (who hasn’t heard the story of Birbal using Khichdi to make Akbar accept a mistake in judgement?). In fact, Abu Fazl’s Ain-i-Akbari mentions several versions of the Khichdi prepared in the imperial kitchen, including ones with saffron, strong spices and dry fruits.

According to India’s celebrated food historian KT Acharya (in his book The Story of our Food), Jahangir’s was so fond of a spicy Khichdi adaptation (enriched with pistachios and raisins) that he named it “Lazeezan” (which translates to “the delicious”)! Jahangir’s role in popularising Khichdi also finds a mention in the travel chronicles of Athanasius Nikitin, a Russian merchant who travelled to 14th century India. Furthermore, French traveller Jean-Baptiste Tavernier, who came to India six times during the 1600s, also wrote about Khichdi (of green lentils, rice and ghee) being a popular evening meal. Even Aurangzeb, who rarely paid attention to food, was fond of the Alamgiri Khichdi, a spin-off featuring fish and boiled eggs.

Such interesting experiment with Khichdi was not limited to the regal repasts of the Mughals. In the 19th century, Nawab of Awadh Nasir-ud-din Shah’s Dastarkhwan (royal kitchen) was famous for its ingenious Raqabdar (royal chef) who would make an outrageously extravagant Khichdi entirely from pistachios and almonds painstakingly cut to resemble the grains of lentils and rice respectively.

Every region in Indian subcontinent have their version of Khichdi, ranging from completely bland to medium spicy or be it completely Satvik to the indulgence of fish and meat in it. As you travel across the subcontinent, Khichdi is prepared in an almost infinite number of permutations.

Khichdi, called Khechudi in Odia is being offered to Lord Jagannath since ages. Considered God’s breakfast, at least five varieties of Khechudi are offered to the Lord during Sakala Dhupa (morning meal). According to texts, there are five varieties of Khechudi cooked in the 12th century shrine in Puri. They are – Tata Khecudi, Nukhura khechudi, Taila Khechudi, Sana Khechudi and Majuri Khechudi. Many pots of Khechudi is offered to the Lord every day. Kanika, also called Mitha (sweet) Khechudi, considered as a favourite of Lord Jagannath. The rice is flavoured with cinnamon sticks, cloves, bay leaf, cardamom, cashew and raisin with a pinch of turmeric and garnished with grated coconut.

In Bengal, elaborate versions of the traditional Khichuri such as Til Khichuri (made with sesame seed paste and saffron), Malai Bhuni Khichuri (made with coconut milk and bak-tulsi variety of rice) and Khejurer Khichuri (made syrup-soaked dates, nuts and thick cream) were being fine-tuned. However, it was the Niramish Khichuri  also known as Bhoger Khichuri— a no onion, no garlic recipe made of sona moong dal, Gobindobhog rice and assorted veggies — that became one of the most treasured components of Bengal’s festival cuisine, especially during Durga Puja.

Sylheti Kisuri from Bangladesh is similar in consistency to porridge that graces most dinner tables during the holy month of Ramadan eaten with mutton curry and omelettes.

Western India too boasts of delicious adaptions like in Gujarat the spicy Ram Khichdi from Kathiwar (with a medley of local veggies) and the milder Sola Khichdi from Surat (with minced meat and fresh cream). In neighbouring Rajasthan, where rice is scarce, subtly spiced Khichdis made with millets like bajra, or with whole wheat, and lentils, are immensely popular. While moong dal (with or without skin) might be the most popular component of a khichdi, a wide variety of lentils — arhar, chana, masoor, urad, etc — are also used widely. 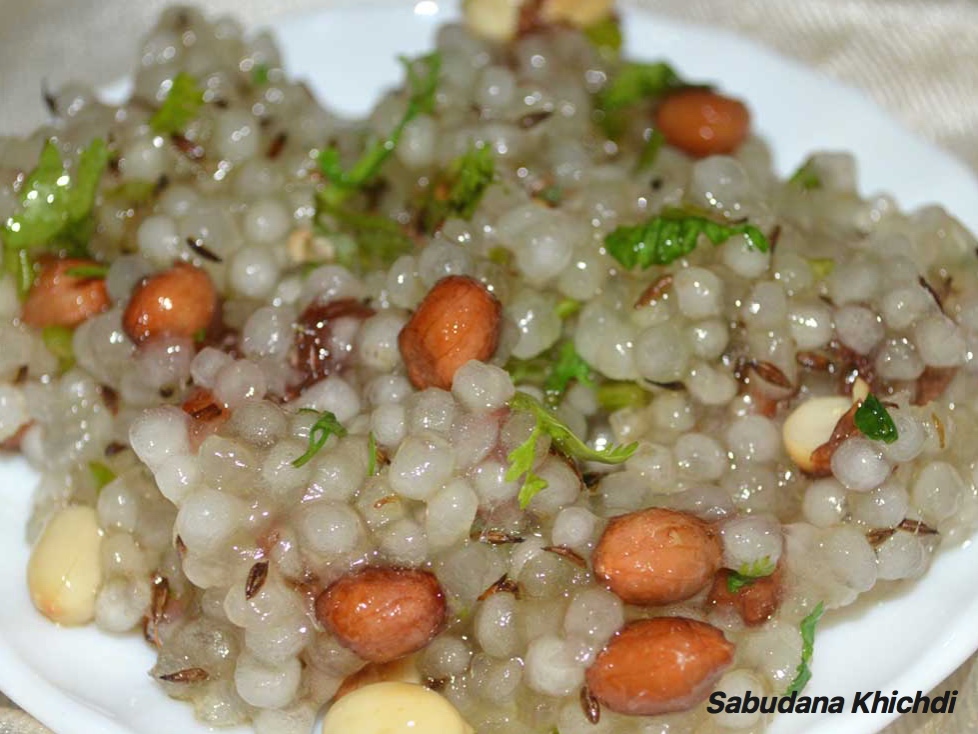 In Maharashtra, where val (or field beans) grow in abundance, the piquant Valachi Khichdi is typically served garnished with roasted groundnuts, cashew, and grated coconut. During fasting days the Maharashtrians prefer to eat Sabudana Khichdi, in which sago seeds are used instead of rice

A variant of khichdi that found prominence in the cuisine of Uttar Pradesh (erstwhile Awadh) was the piquant Amla Khichdi. Made using rice, kali dal (split black gram) and amla (Indian gooseberries), the dish gradually became inextricably linked with the festival of Makar Sankranti.

In Kashmir, Khichdi was traditionally offered as sacrificial food to local deities on Khetsimavas (a festival in December) while the locals typically enjoyed it (and still do) with kadam ka achaar (pickled knol khol). In the adjoining states of Himachal and Uttarakhand, two distinctly-flavoured dishes — Balaee (made with bengal gram, roasted coriander and buttermilk) and Garhwali khichdi (made with urad dal, sesame seeds and warming spices) respectively are immensely popular.

Down south, the imperial chefs of Hyderabadi Nizams had created the unique Kheeme ki Khichdi — a spice-laden mix of rice, lentils and minced meat that was served with sour and soupy khatta. Karnataka’s feted Bisibele Bhat, on the other hand, is believed to have originated in the kitchen of the Wadiyar rulers of Mysore. In Tamil Nadu, the festival of Pongal, a four-day affair, is unimaginable without the eponymous Pongal, yet another rendition of the ubiquitous Khichdi. The savoury Khaara Pongal is tempered with curry leaves, lentils and black pepper. Also, a classic breakfast dish, there is the spicier Milagu Pongal, and the sweet Sakkarai Pongal made with jaggery and nuts. A similar sweet, cardamom-scented khichdi, made with rice and moong dal, ghee, grated coconut, dried fruits and nuts and loads of ghee, is a treasured recipe in the Konkan region.

The kitchens of the food-loving Parsis also spawned a few unusual interpretations of khichdi, such as the Bharuchi Vaghareli Khichdi (made using marinated and fried Bombay duck, a kind of fish) and the Kolmi ni Khichdi (made with prawns and coconut milk). 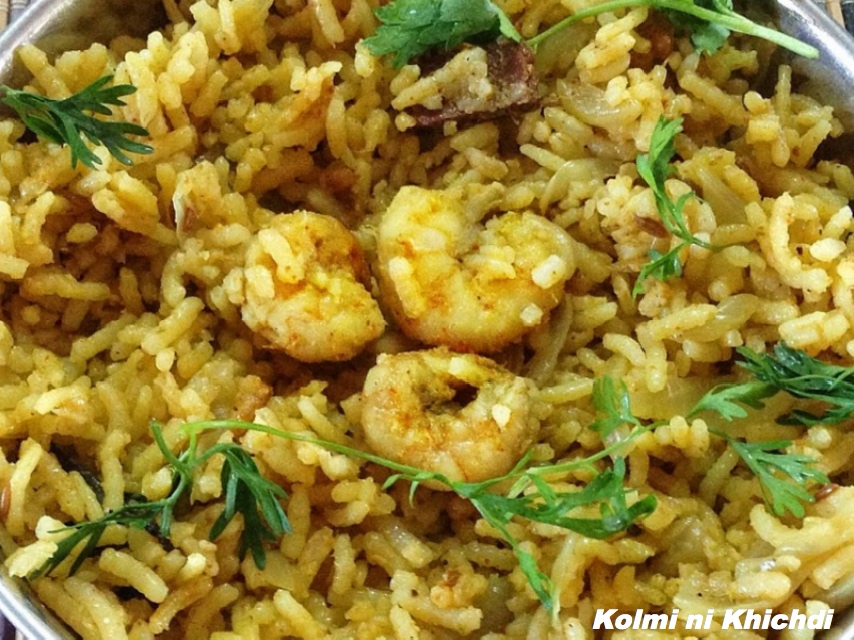 In his book, The Indian Cuisine, Krishna Gopal Dubey writes about a unique tribal specialty called the Asur Khichdi, which is spiked with Mahua flour made from the seeds of the hallucinogenic Mahua flower.

Later, during the colonial era, the Indian Khichdi would go on to be called Kedgeree by the British who took this recipe back to their country. By the 19th century, Kedgeree had become a sophisticated breakfast/brunch dish in England that continues to remain popular even now. It consists of cooked, flaked fish (traditionally smoked haddock), boiled rice, parsley, hard-boiled eggs, curry powder, butter or cream and occasionally sultanas. Our humble Khichdi also has its cousins across the globe; Risotto in Italy, Kushari in Egypt, Paella in Spain, Mujaddara in the Arab world, Jambalaya in Louisiana in USA, Jollof Rice in western Africa. Many of these variants use meat and seafood other than lentils and vegetables. 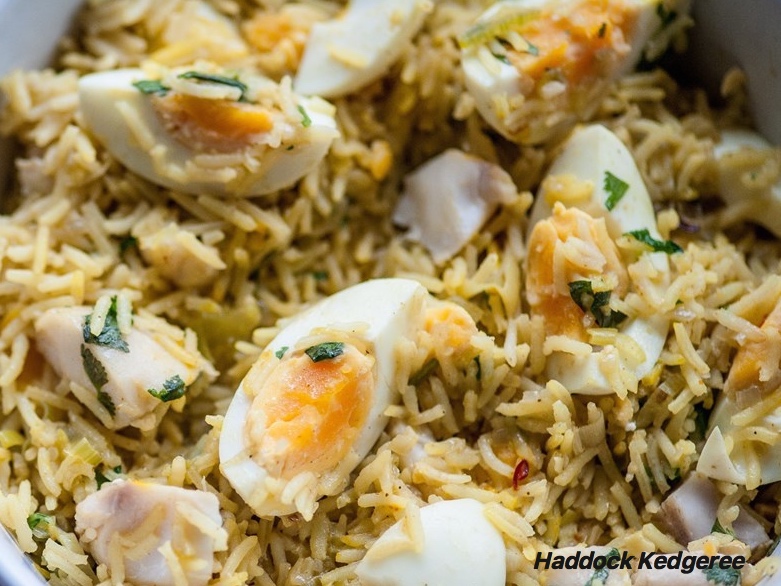 Everyone in the subcontinent vouches for the nutrition quotient and health benefits of this humble dish.
1. A wholesome meal
Khichdi is the perfect balance of carbohydrates and protein, thanks to rice and lentils (respectively). Moong beans are a great source of dietary fiber, vitamin C, magnesium, potassium, phosphorous and calcium. It consists of all 10 essential amino acids, making it a complete protein. Khichdi eaten with desi ghee, one can even get the right amount of macronutrients, complex carbs and fat. Vegetables add fibre, vitamins and minerals. It’s a complete meal when had with a bowl of curd or a glass of buttermilk.
2. Easy to digest
Khichdi helps ease digestion and assimilation, and is hence recommended by doctors during illness for fast recovery. It also heals and soothes the intestinal wall. Khichdi is also the first solid that babies are introduced to in India.
3. Gluten-free
People who suffer from gluten sensitivity or celiac disease, or opt to go gluten-free as a lifestyle change, can eat Khichdi. It packs enough nutrition and yet is light on the stomach.
4. Balances Dosha
The ancient Indian “science of life” Ayurveda explains that human beings, like the Universe, are made up of each of the five elements: Air, Space, Fire, Water, Earth and the Soul. These elements, in their biological form, are known as Doshas: Vata, Pitta and Kapha. Khichdi is one of the most healing meals in Ayurveda because it is tri-doshic. It balances all the three doshas. According to American author and Ayurvedic physician, Vasant Lad, in his book The Complete Book of Ayurvedic Home Remedies, “A five-day khichdi fast, using plain khichdi with just some chopped cilantro leaves added, will cleanse the system and help to strengthen memory.”
5. Detoxifies Your Body
Khichdi is the food of choice of Panchakarma (Ayurveda’s deepest detox retreat). During a cleanse, the metabolism slows down and the digestive strength weakens, so any food eaten must be very easy to digest. One also needs adequate protein to keep the blood sugar stable and burn fat, which is where the lentils come in.

Today, with every region having its own take on this classic dish, it won’t be an understatement to call khichdi India’s version of culinary comfort. From serving as a baby’s first meal and gruel for the sick to a deeply satisfying lunch on a rainy day, this versatile dish effortlessly lends itself to diverse occasions.

A dollop of ghee on top and accompanied by curd/butter milk, pickle and papad the simple “KHICHDI” can be a star of the show.